“Man is least himself when he talks in his own person.
Give him a mask, and he will tell you the truth.” – Oscar Wilde

I have been a proud member of the North American Drama Therapy Association for a long time. Having been introduced to DT by one of its founding members, Don Laffoon of the Stop Gap Theatre Co. (in whose company I served for many years), I have seen first hand the incredible, immediate effects that this form of therapy has in changing lives.

Here is how we describe Drama Therapy on the NADTA website:

“Drama Therapy is an active, experiential approach to facilitating change. Through storytelling, projective play, purposeful improvisation, and performance, participants are invited to rehearse desired behaviors, practice being in relationship, expand and find flexibility between life roles, and perform the change they wish to be and see in the world.”

“In former times acting simply meant putting on a disguise. When you took off the disguise, there was the old face under it. Now it’s clear that the wearing of the disguise changes the person. As he takes the disguise off, his face is changed from having worn it. The stage performance informs the life performance and is informed by it.” – Joseph Chaiken

Combining the written word and ambient music with the sculptural movement of expressive arts therapy, an artist improvises a scene called “Catharsis.”

Here are some of the events I have been privileged to share in my work as a drama therapist. 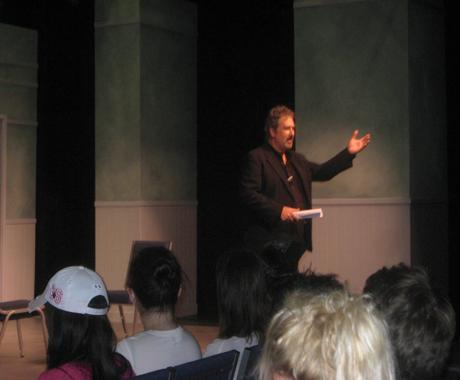 Working with actors at the American Academy of Dramatic Arts 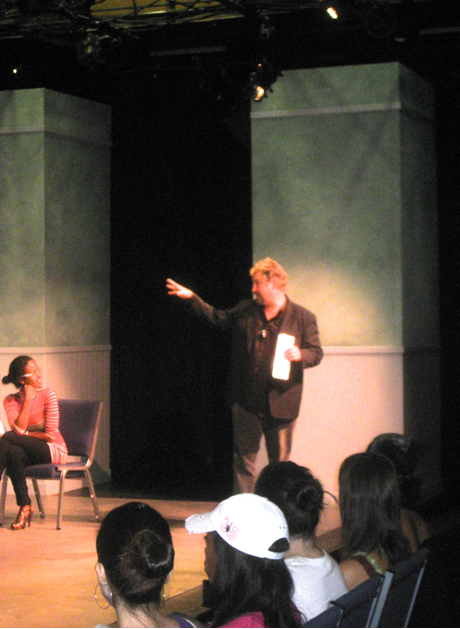 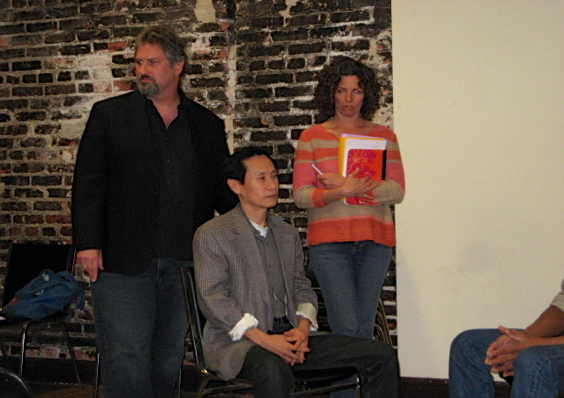 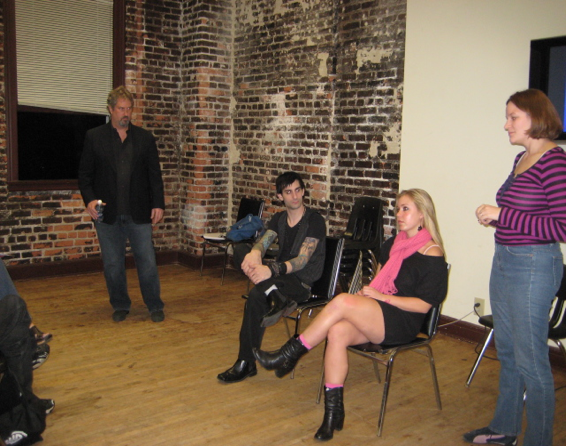 Using Drama Therapy techniques to help work with the Directors. 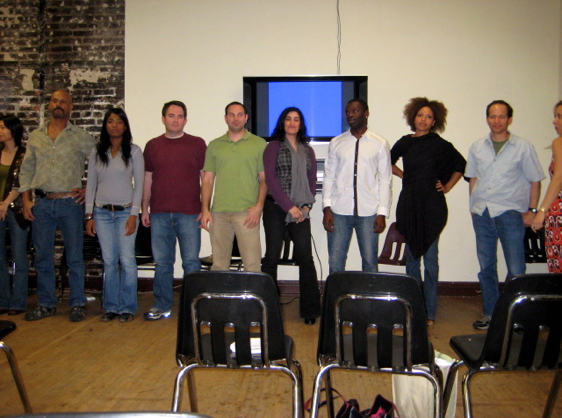 What’s it like to be seen? What does an actor feel like when she is being scrutinized? 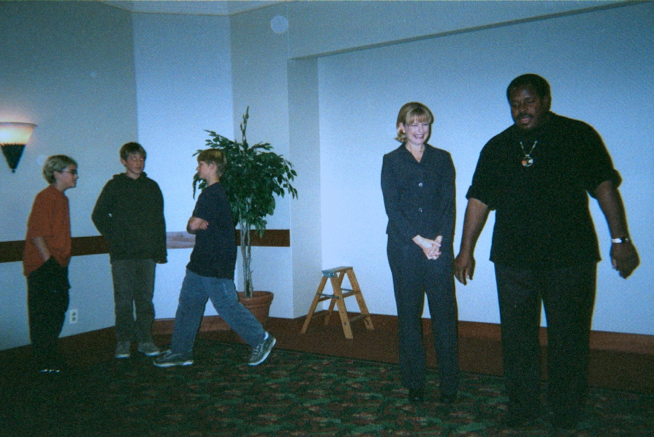 STOP GAP at work using only a few ladders and a lot of imagination. The audience becomes the writers and directors of the action. 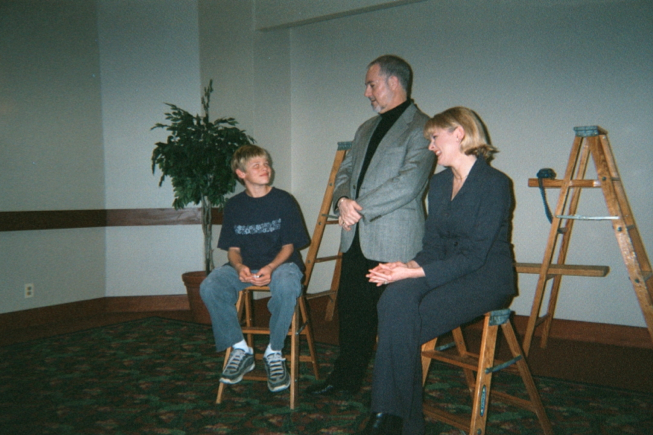 Here a young boy plays the Director of C.H.O.C. Read the story below.

Rehearsing for Life at C.H.O.C. (the Children’s Hospital of Orange County)

The young boy came and sat down next to me in the “play room” of the Children’s Hospital. I noticed that he had a long and gnarly scar running lengthwise along the top of his head indicating that his brains had been sewn back into his badly damaged skull. While I did not learn till later the extent of his accident, I did recognize that this child was still in a bit of shock, and I was there as a therapist to see what I could do to help him.

I am a licensed Marriage and Family Therapist but have been practicing the use of Creative Arts Therapy for a long time and I was at this particular hospital as a registered Drama Therapist. Our team would go into an environments like these; hospitals, battered women’s shelters, drug and alcohol rehab centers, schools, prisons and elder facilities, and help talk about the issues facing the clients in each of those locations through the magic of improvisation and play.

At the Children’s Hospital, on this day, we decided to ask the children to “play” the doctors and directors of the hospital so that we could learn how they wanted to be treated, what they wanted their experience to be like in the hospital and how scared they were about their treatment (and consequently what we could do to ease that fear). We, the therapists, would then play the kids, thereby putting all of the empowerment in the hands of the children, with us acting out the questions, the pain and the trauma that they were going through.

To my surprise, the young boy (lets call him Marcus) volunteered first to play the doctor and he began to treat a young girl (played by one of our actors). The scene was beautiful, for Marcus informed the young girl why it was important to take her medications, to do what she was told by the nurses, and to talk to someone when she got scared. Most importantly, he told her, “It would get better.” This was not exactly true for many of these kids, for most of them were dealing with life-ending diseases. Marcus was on the wing due to the severity of his head trauma. However, he showed us exactly, in his youthful honesty, how he wanted to be treated and what he felt was important about his recovery.

What a surprise then to hear him tell us, as we processed the “play” afterwards, that he wanted the young girl to die. When we asked Marcus to explain his feelings about this thought, the young boy exclaimed, “Cause then there would be a funeral.”

It became obvious, at that moment, that the real work was about to begin.

Marcus’ family had been killed in a car crash that had sent him flying from the scene, damaged but alive, and he had yet to go to the “funeral” for his parents. He had no idea what a funeral was and he wanted to be prepared. We immediately started to ask the kids if anyone had been at a funeral or memorial service and if so what happened there. The kids told us that we honor the people who have died and talk about all the good stuff they did in their lives, and so we began to play a funeral, allowing Marcus to rehearse the one he was to attend by honoring his mama’s love and care and hamburgers and singing and papa’s bear hugs and laughter and throwing a ball.

He was smiling as he remembered these precious moments while we “professionals” were doing everything we could to hold back our tears. It is often the patients who are the strongest as they face these life-threatening situations, and while little Marcus had much more therapy to do as he struggled to carry on without his loved ones, he was learning to express his feelings and honor his life.

“And in the end, it’s not the years in your life that count. It’s the life in your years.” – Abraham Lincoln