Posted by Bradford Bancroft on Aug 2, 2013 in Vignettes |

Growing Up with Weapons 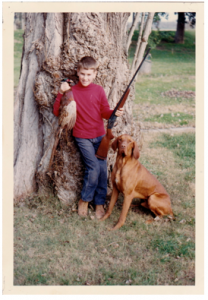 When I was five years old I was made to follow my daddy around acres of hedgerows, up and over levees, through cornfields and woodlands, an empty 4-10 shotgun in my little arms, a watchful eye on me at all times, ready to jump down my throat if at any moment I became tired and careless, pointing that weapon anywhere but up in the air or away from the other people in our group. That’s the way it was done. We were hunters. We were careful and we ate what we shot. Nothing went to waste.

By the time I was eight, I was ready to take the NRA exam and I was proud to have passed. That Christmas Santa rewarded me with my own 4-10 shotgun. Shortly thereafter  I shot my first pheasant. I couldn’t have been prouder if I had won the Nobel Peace Prize (irony noted). My dad beamed with the pride of a father who had taught his son, correctly, the responsibility and care of dealing with such a formidable piece of machinery as this weapon. I had just killed a living thing, and while this bird was food for the family, this weapon could easily be used to kill another human being, either purposefully, or as happens more often than naught, by accident, and I was never to forget that.

I don’t hunt anymore. The tradition has not carried down to my son, though other nephews and nieces have been brought into the fold. That’s ok. I have done enough killing in my day. I was good at it. I used to worry and ask myself, as I got to conscription age, old enough to be sent to Vietnam, if killing a charging Vietnamese soldier was the same as killing a charging elephant. I didn’t know, and I certainly didn’t want to find out.

Now I am a psychotherapist dealing in the war of mental health issues. I see how our world community needs fathers who will follow their children around carefully, showing them how to use their weapons, how to be conscious of those around them. To show them the pride of providing for their families, of earning their daily bread. To teach them the cost of things, the cost of human life. It makes me so sad to find myself so often in the role of the “father” as I care for these young folks in the various environments I work in. And I can’t help but notice that in so many of the recent gun violent tragedies, it was young men who were perpetuating these crimes, and in most of the cases, the father was missing or was not that involved in the child’s upbringing. This is not to say that our moms do not take up that slack, but in the tradition of balance, it sure is important to have that combination of male/female influence.

I call my work as a creative arts therapist, Rehearse For Life. We are able, in the safety of our “play space,” to explore all of the choices we have before us as we head into the confrontations facing us each day. We can look at what consequences our actions will create, and we can decide, with some shared wisdom (just like dads do) what course of action might be the best to take.

My dad showed me respect at an early age which was so important for me to grow into a healthy man. And by offering me that respect, I wanted to earn it. He taught me about boundaries, about communicating when frustrated instead of “acting out.” He taught me to not be afraid of asking questions when I didn’t know something. He taught me to be humble. He showed me how to be a student and a teacher.

So I carry the traditions of being a hunter that my daddy taught me, but I no longer carry a gun. Times have changed. There is a scarcity in some parts of the world of those animals once hunted freely. There are weapons being created far more powerful than my little 4-10 shotgun, more dangerous than my 30 odd 6, the rifle we used to bring home deer meat with.

Yes. Times have changed and so should we. I respect hunters and the hunting tradition, but lives are at stake. I don’t know where I come down on all of the talk regarding gun control legislation but I do know we have a duty to care for our children and make sure that they are being brought up in the safety of a home where these powerful weapons are not so readily available.

It seems we therapists and teachers are having to take up the slack of those fathers who are not caring for their children in a meaningful and conscious way.

Where are the daddies to bridge the gap?