Posted by Bradford Bancroft on Jun 1, 2013 in Vignettes | 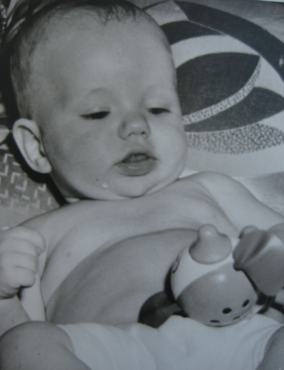 I really feel for mothers, especially for those who have created a brood of young needy ones. It is hard to keep up. With all that is going on simultaneously around a busy house, it is easy for the hardworking, stressed-out mother to get distracted and forget where she has left her To Do List or her phone book, or her child, for that matter.

When we finally were able to move into our first home in sunny California, it was quite a change for my mom. I had been born in a one-room walk up in Manhattan where I have been told my crib was actually the bathtub, which also served as the dining room table once a board was placed over the unit. In that space one can imagine it would not be hard to keep tabs on a child, but as a couple more children joined us quickly it was time for a change. Fortunately, my dad found a new job in the burgeoning venture capital business near San Francisco and we moved to our first house.

Not long after moving I was learning to “potty train” and in those late years of the 50’s and early 60’s, an enterprising mother might use a specially-made toilet seat with belts to secure her young one to the commode until his business was done.

This works wonderfully in principle unless one’s mother forgets that she has tied you to the toilet bowl and leaves you there as she completes her vacuuming, dusting, polishing, what have you.

She stopped suddenly, hearing the faint sound of a one-sided conversation taking place in some part of the house. Had she left the television on in the den? What was that?

It suddenly occurred to her, as she thought about calling out my name, that she remembered where she had left me and that, indeed, the bathroom was where the conversation was coming from.

She rounded the corner to find me deeply involved in a serious conversation with my penis.

“Brad. What are you doing?”

“I’m talking to Mr. Fish, mama,” I replied, showing her how I could manipulate the little fish mouth opening at the head of my penis to have a delightful conversation. “Do you want to talk to him?”

Mama, bless her heart, smiled at me and said, “I think I have talked to Mr. Fish quite enough, thank you very much, Bradford Bancroft. Have you finished your business?”

“Alright, then, let’s get you and your new friend up and ready for the day. What do you say?”

I say thank you, sweet lady. For all your care, for not shaming me as I met my Mr. Fish and thank you mothers all, for taking care of your young sons this way.

They will grow up to become the men you wish your daughter or son would be proud to marry one day.