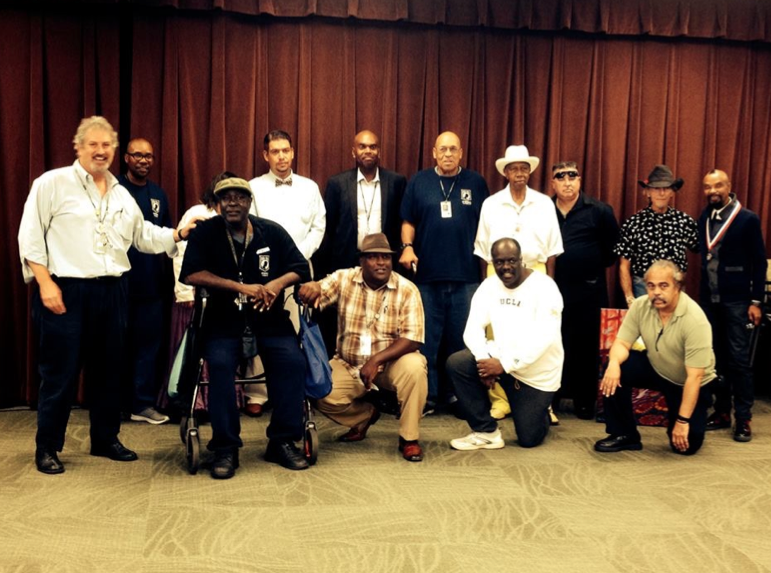 I adore my work at the VA (The Veterans Administration) and I love being in that community. Everyone is cordial and respectful to each other, part of the honor of having served. And yet, even though I did not serve this country as they did, they know I am serving them now, all these years later, with joy and respect and honor.

I lovingly refer to my work with them as “Karaoke Therapy.” I listen to them, encourage them while helping them to find their voice as we use music to find our common core.

One of the janitors greets me each morning with, “Hey Mitch Miller! Are we doing some singing today?” And I always smile and say, “You bet we are- and I’d love for you to swing by and join in!” He usually does, on the pretext that he is cleaning up something, but I often find him standing to the side, tapping his toes and mouthing the words to songs he remembers and has enjoyed for so many years.

This man replaced another lovely African American vet who served us in our building for decades. We work in the P.T.S.D. wing of the community and I just loved this guy. I so cherished his energy and commitment to the guys and gals in our unit. He would drop his broom and come up to sing “Me and Mrs Jones” full throttle, doing his best romantic crooning moves (sounding “a little pitchy” as the professionals might say) but his soul was so beautiful and the joy he felt in   belting out his song was unimaginable. I think about him every day I am there. He served me as faithfully as he served his brothers in arms.

Yesterday, a vet rejoined the group. He has been away for a long while. I was worried that he had passed away. He used to have long grey hair and the last time I saw him he was bald, wearing a bandana over his skull and looking weak. I suspected cancer and radiation treatment, but didn’t ask. I invited him to sing his usual blues numbers that day, but he declined. I had come to understand he was one of our dual diagnosed patients (having both mental health and substance abuse issues) and so I was careful to suss out what kind of “mood” he was in when he came into my classroom so as not to upset his apple cart.

Yesterday, he came in and I was honestly thrilled to see him. Without thinking (or, rather, while reacting from my heart) I touched his arm gently to show my sincere gratitude, and while I could see a part of him recognized me and my touch, his absence had made his obstinance return and he gently scolded me, “Don’t touch me!”

I apologized sincerely and simply smiled, “I’m so glad to see you, Arnie” (name changed). He immediately reverted to his mildly manic way of talking, telling me he wanted to do an A Cappella version of American Pie by Don McLean. I told him we had the music for that number but he insisted on singing it alone. He said it was too long and he was going to skip the choruses and just sing the verses. I suggested we could open the class with this and he agreed immediately.

Well, godamn, if this guy didn’t sing every single verse of the song, helping us all to hear and understand the lyrics so clearly. He expressed the sadness and forlorn feelings in the song and when it was over (with the group finishing the song with the bubbly chorus), I asked Arnie what it was that he wanted us to know about that song and it’s importance to him.

“That I’m ready to die.” he replied simply and honestly. “This’ll be the day that I die!” he sang.

I don’t know when that will be, but he showed us how he was approaching the end of his journey. Bravely, ironically, with a sadness and nostalgia for all he had experienced in his long life, and each of us got it and was so moved by his admission. We also marveled at his memorizing all twelve thousand verses and he admitted that he had been practicing awhile. Made me realize how important this “performance” was to him.

And by performing so, he was a new man. I started playing a blusey Allman Brothers track and Arnie immediately pulled out a harmonica and started blowing into the microphone. Phenomenally (and luckily) his harp was in the same key, and the smile that came over Arnie’s face as he blew his feelings into that blues progression was fantastic.

At the end of the song, with his fellow vet’s mouths dropped to the floor, Arnie announced, with a mixture of both awe and pride, “That’s the first time I’ve ever heard myself through a microphone! It sounded pretty good!” Everyone agreed, applauded and Arnie smiled the biggest smile I had seen from him in years.

Yes, I love this work. I love these guys and gals, and am so honored to have a small part in their often overwhelmed lives.

The music we play, we share, we explore, takes us to special places in our hearts and memories. Each of us grows a little taller, a little brighter as we share the arts together and head bravely into the future.