Posted by Bradford Bancroft on Aug 2, 2013 in Vignettes | 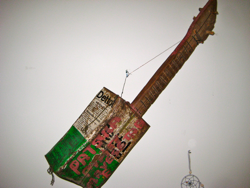 I have on the wall in my therapy office an old African detergent can with a cruddy piece of stick coming out of the top strung with some found wire. Most folks consider it an odd art piece, but in actuality, it is a living life lesson for my musician clients.

As a creative arts therapist who works with a lot of wonderful artists, I love the complaint (or desire) that some musicians share with me that they need the impressive new technology in order to do their work. They talk about the great new samplers and processors and synthesizers available, and if only they had these devices, they could then accomplish their goals of musical creativity. It is sometime during this monologue that I pause the conversation to point to my “art piece” on the wall and ask them to consider the story behind it.

I was in the newly formed country of Zimbabwe many years ago shooting an action/adventure film on the Zambezi River. In one of the little townships I visited while there, I found a little boy who was playing what looked like a guitar, but was made out of an old rusty can and whatever else he could find in order to make some sound. As he played his homemade instrument, he had the biggest smile I had ever seen on a child’s face. The music he was “playing” was making him joyful beyond belief and his joy was infectious. 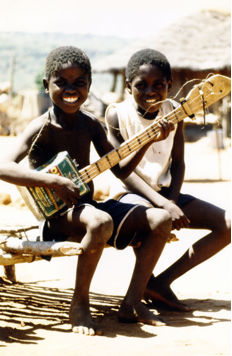 I asked him if he could make another one of his guitars for me and if so I would pay him for it. I think he and his family were able to eat for a year with what I offered for his guitar, and now I point to it on my wall, remembering the beautiful music (in the most strained sounds one can imagine) that poured from this little boy’s need to make a song.

When we can reconnect with our original passion and intention to create, it doesn’t matter what tools we actually have. Sure, it will sound a little cleaner than the rusty old wire coming out of that detergent can, but it won’t be delivered with any more reverence than your inner child’s desire to hear the angels sing.